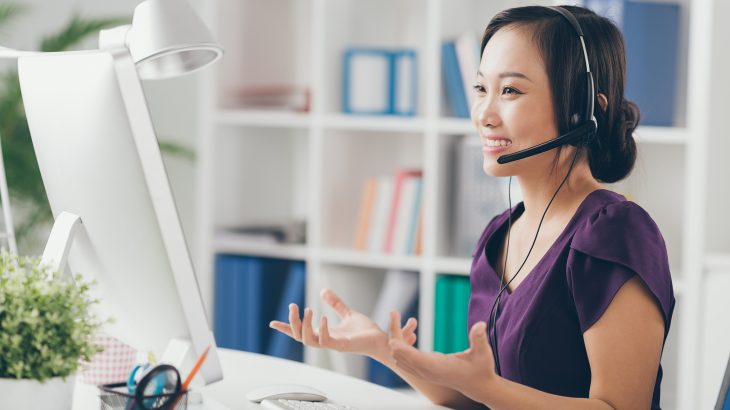 Before we go into details on this topic, the reader should have basic knowledge on the difference between simultaneous and consecutive interpreting. If you are not sure you understand how they are different in style and/or in use, please first read this article.

How does it work?

“Is this technically possible?” you may ask. That is a valid question. It is NOT technically possible on a regular conference call or online video conference system. In these conventional technologies, when two or more people speak simultaneously (i.e. when someone speaks over someone else), it makes it impossible for everyone on the call to decipher what anyone is saying. (As you probably have experienced firsthand!)

When/how to use it?

As you probably can imagine, this system works best in usages such as Webinars where the communication is largely one-way in a single language from the presenter(s) to the audience, with minimal switching back and forth between different languages (e.g. English-to-Japanese, then Japanese-to-English.)

It is technically possible for the interpreter to switch back and forth between different languages (e.g. English and Japanese). However, in, for example, a small group discussion or negotiation scenario where one party speaks in one language (say, English), then the other party responds in another language (say, Japanese), it could be quite challenging for the interpreter as she is required to not only switch the language direction in her head each time, but also remember to press the correct language button each time the language switches. Having said that, many of our interpreters are used to these multi-lingual discussion scenarios in past face-to-face projects, so we will happily take on the challenge in this new remote setting.

It is also possible to combine the use of simultaneous and consecutive modes of interpretation in a single meeting depending on the different formats of discussion that may take place during a meeting. For example, if the first half of a meeting is a one-way presentation by a “seller”, followed by a Q&A session between the buyer and seller, it makes perfect sense to use simultaneous interpretation mode during the presentation, then switch to consecutive interpretation mode for Q&A. Such combined use of the two modes would also work well for remote training or workshop sessions that combine both presentation/lecture time and Q&A or discussion time.

We are happy to help you figure out what works best for you!

RSI systems are still new to the industry, so interpreters are still getting used to them and experimenting with different use cases. If you are interested in trying this convenient and very effective technology, please feel free to contact us so we can help you with what works best for you.

Please note that regardless of remote or on-site, simultaneous interpretation is extremely taxing on the interpreters, so we always work in teams (usually two interpreters will take turns every 15 minutes). This means the cost for simultaneous interpretation is usually double that of consecutive. There also is a nominal usage fee for the RSI system based on the number of participants and the duration of the meeting.

There was no related article